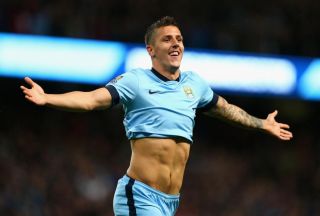 The defending champions had to withstand some pressure from the side they beat to the title last season, but underlined their clinical touch in front of goal.

Jovetic opened his account for the season in the closing minutes of the first half with a close-range finish and doubled his tally to cap a flowing City move before the hour.

Sergio Aguero's first act after replacing the injured Edin Dzeko in the second half was to strike a third goal for the hosts as he slid a low shot out of Simon Mignolet's reach.

With new signing Mario Balotelli watching on after completing his move from Milan, Liverpool gave a debut to Alberto Moreno, while Joe Allen returned for Lucas in midfield.

Zabaleta's recall for City enabled Gael Clichy to revert to left-back and the 29-year-old was at the heart of the hosts' good early play.

Dzeko and Yaya Toure both had sights of goal in the opening 15 minutes thanks to Clichy crosses, but neither was able to stretch Mignolet.

Steven Gerrard executed a perfect pass to find the striker at the back post but, having escaped the attentions of Vincent Kompany, his fierce left-foot shot was pushed away.

Hart's efforts proved crucial for City as they went on to open the scoring through Jovetic with four minutes of the half remaining.

As Moreno dallied on a knockdown from Dejan Lovren inside the Liverpool penalty area, the 24-year-old nipped in and lashed the ball through the legs of Mignolet.

Rodgers' side had the ball in the net four minutes after the break but the linesman's flag denied Sturridge, much to the relief of Kompany who had misjudged a Glen Johnson cross.

To rub salt into the Liverpool wounds City promptly doubled their lead as Jovetic completed a neat one-two with Samir Nasri with a calm finish.

The striker's flick ran perfectly into the Frenchman's stride, and Nasri returned the ball to his unmarked team-mate to apply the finish.

The introduction of debutant Lazar Markovic breathed some life back into Liverpool, but a ruthless City outfit extended their lead even further in the 69th minute as Jovetic turned provider.

His pass released Aguero in behind the Liverpool defence and the Argentine confidently fired low into the back of the net, just 23 seconds after replacing Dzeko.

Liverpool, who have now only won once in their last nine visits to City, pulled one back with seven minutes to play as Zabaleta nudged the ball into his own goal.

Sturridge showed good strength on the right and delivered a perfect cross to Lambert, whose header was saved by Hart before the loose ball struck the defender on the knee and dropped over the line.

There was further bad news for Liverpool as Johnson hobbled off after all three substitutions had been made, while Moreno appeared to turn his ankle in injury time but carried on.