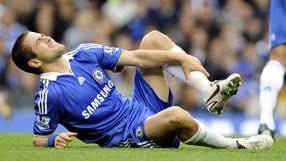 Joe Cole and Ricardo Carvalho are both still injured while Alex, Juliano Belletti and Franco Di Santo all picked up knocks in the League Cup defeat by Burnley on Wednesday.

Michael Ballack is expected to be included in the squad.

Wayne Rooney has been laid low with a chest infection and could be a doubt for Manchester United's home match against Stoke City on Saturday.

"Wayne Rooney had a bit of a chest infection and he's been off this week," manager Alex Ferguson said. "But hopefully he'll be alright for tomorrow."

Almunia sustained a head injury late on in Arsenal's defeat of Manchester United last week when Fabianski came on for the final 10 minutes. The Spaniard is in the squad.

Striker Emmanuel Adebayor is also included in the squad after recovering from an ankle injury, while fellow frontman Robin van Persie is still suspended.

Villa are hopeful that Norwegian striker John Carew will play after he missed last weekend's defeat by Middlesbrough with a hip problem. Villa go to the Emirates after consecutive league defeats dented their top-four aspirations.

Fernando Torres will start his first league game for Liverpool in more than a month against Bolton Wanderers in Saturday's lunchtime kick-off.

The Spaniard, who injured his hamstring on international duty, started against Tottenham Hotspur in the League Cup defeat on Wednesday, playing for 60 minutes with no ill effects.

Blackburn Rovers will be without striker Benni McCarthy against Sunderland at Ewood Park on Saturday after he flew back to South Africa following a family bereavement.

Roque Santa Cruz could start, however, after he came off the bench to score against Sunderland in the League Cup victory on Wednesday.

West Ham United are trying to reverse a terrible slump in form and will be boosted by the return of striker Carlton Cole from a three-match ban when they host Portsmouth on Saturday.

Former England winger Kieron Dyer has also returned to training after recovering from a double leg fracture sustained in August 2007.

Manchester City are counting the cost of last week's defeat by Tottenham Hotspur with both Richard Dunne and Gelson Fernandes suspended after they were sent off in that game. City take on high-flying Hull City on Sunday.