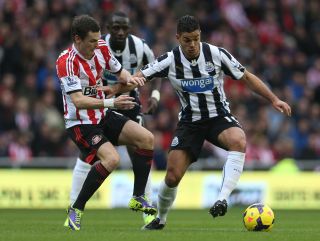 The Italian was introduced in the 68th minute and grabbed the winner with a powerful 85th-minute strike from the edge of the penalty area.

Steven Fletcher gave Gus Poyet the perfect start to his opening game in charge at the Stadium of Light by breaking the deadlock in the fifth minute, but Sunderland were unable to hold on to that lead.

Mathieu Debuchy’s first goal for Newcastle brought the visitors level just before the hour, the defender converting a simple tap in at the back post.

Substitute Shola Ameobi came close to winning the game for Newcastle, but it was Borini who ultimately secured three points for the hosts.

The win sees Sunderland move off the bottom of the Premier League table at the expense of Crystal Palace.

Poyet made four changes to the side beaten by Swansea. Andrea Dossena and Carlos Cuellar came into the defence, Jack Colback was selected in central midfield and striker Jozy Altidore replaced joint top-scorer Emanuele Giaccherini.

Youth product Paul Dummett replaced the suspended Mapou Yanga-Mbiwa in the heart of the visitors’ backline, with Fabricio Coloccini and Steven Taylor still absent through injury.

The hosts made a great start as Fletcher headed home his second goal of the season in the fifth minute.

Adam Johnson and Sebastian Larsson worked a short corner routine and, when the former stood a ball up to the back post, Fletcher rose above Dummett and beat Krul from close range.

Newcastle failed to pose any real threat in the opening period and were reliant on long shots from Yohan Cabaye as their only moments of promise.

The Frenchman fired his first effort over the crossbar and his second, a free-kick, was easily held by Keiren Westwood.

Sunderland almost created a second goal midway through the half, but Fletcher saw his effort palmed away by Krul.

The introduction of Papiss Cisse at the break gave Newcastle more of an attacking threat and 13 minutes into the second half they were level through Debuchy.

Cisse’s introduction released Hatem Ben Arfa and the Frenchman created the equaliser for his compatriot.

Ben Arfa’s low cross appeared to evade everyone inside the penalty area, but Debuchy ghosted past Johnson to tap home at the back post.

Yohan Cabaye went close to putting the visitors ahead just after the hour, but he saw his curling effort fly just wide of Westwood’s post.

The Italian found space on the left of the penalty area and saw his low shot slip through the legs of Krul, only for the goalkeeper to react quickly and pounce on the ball.

However, Borini was not to be denied and, after Ameobi had drilled an effort wide from 20 yards, he rounded off a flowing move to register his first goal for the club.