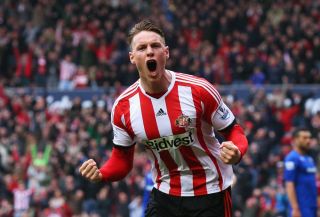 Head coach Gus Poyet stated that it would take a "miracle" for Sunderland to survive after their defeat at Tottenham earlier this month, but they must fancy their chances of pulling off the great escape after Sunday's victory at a packed Stadium of Light - which ensured Cardiff replace them at the foot of the table.

The resurgent Wickham, fresh from scoring goals at Manchester City and Chelsea, set them on their way when he headed home after some poor Cardiff defending.

And fellow striker Borini, scorer of the winning penalty in a stunning 2-1 triumph at Stamford Bridge, was on target from the spot again on the stroke of half-time after Juan Cala had tugged back the impressive Wickham and was shown a red card.

Cardiff were unhappy with referee Phil Dowd's decision, with initial contact made outside the penalty area, but the defender was the last man and Sunderland gained no advantage.

Emanuele Giaccherini added a third, and another Wickham header capped a miserable outing for Cardiff, who are now two points behind Poyet's men with two games remaining and face the prospect of an immediate return to the Championship.

Sunderland, on the other hand, have momentum on their side with three games to play after moving to 17th in the table, leaving Norwich City in the drop zone.

Wickham was passed fit after sustaining a knock at Stamford Bridge last weekend and the in-form striker had the bit between his teeth as Sunderland started in the ascendancy.

Cardiff goalkeeper David Marshall had to be alert to turn the former Ipswich Town man's effort from wide on the right around the post five minutes in.

Marshall was beaten 25 minutes in, though, when the lively Wickham capitalised on some hesitant Cardiff defending to head home at the back post after Sebastian Larsson's corner from the left was not dealt with.

With the balance of play firmly in their favour, Sunderland strengthened their grip on the game a minute into first-half stoppage time, when Borini doubled their lead after Cala was given his marching orders by Dowd – much to the bemusement of the visitors.

Cala's dreadful backpass allowed Wickham to race clear and although he stayed on his feet after being tugged back - initially outside the penalty area - there was no advantage, so Dowd pointed to the spot before showing the Spanish defender a red card and Borini kept his cool to find the bottom-right corner.

Solskjaer replaced Don Cowie with Wilfried Zaha at half-time, but Cardiff were rattled and Fabio Da Silva was possibly fortunate to only be shown a yellow card after he barged Larsson over early in the second half.

Jordon Mutch headed over the crossbar and Sunderland goalkeeper Vito Mannone reacted superbly to keep out a deflected Peter Whittingham free-kick as Cardiff threatened a comeback.

Any hopes of a Cardiff comeback were ended 15 minutes from time, when second-half substitute Giaccherini finished clinically with his left foot after Borini had picked him out.

Giaccherini then turned provider for Wickham four minutes from time, swinging in a corner which the striker stooped to head home to cap a fine performance in front of a fervent crowd on Wearside.