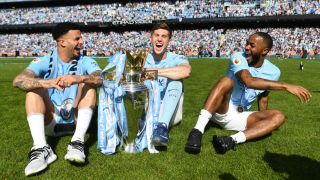 John Stones says it is "literally a dream come true" to win a maiden Premier League title with Manchester City.

The England defender started in the league for the first time since January as the champions were held 0-0 at home by Huddersfield Town on Sunday.

Stones is among a cluster of first-time champions at City and the former Everton and Barnsley defender believes Pep Guardiola deserves huge credit for leading the club to a terrific triumph.

"It's literally a dream come true," Stones told Sky Sports. "Me and Kyle [Walker] were speaking after the game saying that this is why we came here.

"We just never knew what it would feel like to lift the Premier League trophy. It literally is just a dream come true.

"Every day [Guardiola] has not let the standard slip at all, every day he's been wanting to improve us individually and as a team.

"It's credit to him and his staff, he'd never say that it's just about him or his staff, it's a collective. I think that's why we've gelled so well together."

England team-mate Raheem Sterling hit 18 Premier League goals in City's run to the title and he, like Stones, is a first-time Premier League winner - although he is already targeting more.

"It's an amazing feeling," the former Liverpool man said. "We've been looking forward to this since we were kids and now we've done it! Brilliant, let's go again.

"When we found out we won a couple of weeks ago it didn't really feel that real without the trophy. Now we've actually lifted it it's an amazing feeling.

"Over the course of the season there have been testing moments for us. Losing games, drawing games when we've needed to win, we've had difficult moments but we've done it.

"It's been a great fightback. You can see from our team spirit throughout the whole season, it's been great and we deserve it massively."