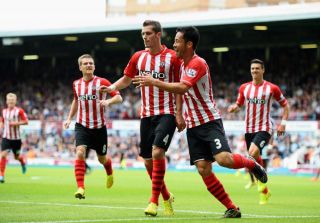 The France international has been regularly linked with a move to Tottenham and hinted at being dissatisfied with life at the club earlier this month.

But, with the transfer window closing on Monday, the midfielder produced an eye-catching - if not entirely faultless - display to earn Ronald Koeman his first league win at the helm.

Mark Noble's deflected strike handed the hosts a scarcely deserved lead midway through the first half, only for Schneiderlin to level matters from inside the box just before the break.

Graziano Pelle had a goal wrongly ruled out for offside just before the hour mark, but justice was served when Schneiderlin doubled his tally in the 68th minute.

And Pelle scored his first Premier League goal late on to complete an excellent week for an ever-improving Southampton, who beat Millwall in the League Cup on Tuesday.

Barcelona midfielder Alex Song was introduced to the home fans before kick-off having agreed a season-long loan deal at Upton Park but the Cameroon international saw his new side start slowly.

Southampton dominated possession and had the first sight of goal, Dusan Tadic dragging a shot wide from the edge of the box inside the opening five minutes.

West Ham still looked to be suffering a hangover from their midweek penalty shoot-out loss to third-tier Sheffield United in the League Cup but after Ricardo Vaz Te was brilliantly denied by Fraser Forster, they took the lead against the run of play in fortuitous fashion.

Schneiderlin meekly surrendered possession in midfield and Noble was the beneficiary, picking up the loose ball before unleashing a long-range strike that took a heavy deflection off Maya Yoshida on its way past Forster in the 27th minute.

That made it four goals for the midfielder against Southampton in their last four visits to Upton Park.

Koeman's side responded well and Pelle threatened with a header that was cleared by the well-placed Aaron Cresswell, but there was no stopping Schneiderlin's effort on the stroke of half-time.

Schneiderlin collected a free-kick unmarked at the back post and, though his initial shot was blocked by Joey O'Brien, his curling follow-up nestled into the back of the net.

Shane Long tried his luck early in the second half but was brilliantly denied by Adrian as the goalkeeper dived to his left to tip a vicious effort past the post.

The Spaniard had to be alert again in the 52nd minute to keep out Tadic's dangerous attempt, with Pelle denied by an erroneous offside flag seven minutes later after heading home James Ward-Prowse's delivery.

The visitors were not to be denied, though, and Schneiderlin took advantage of West Ham's confusion as the home side debated the award of a corner, the 24-year-old tapping in Ward-Prowse's assist from close range.

Pelle grabbed the third seven minutes from time when Adrian could only parry Nathaniel Clyne's cross as Southampton celebrated a first league win of the campaign in style.