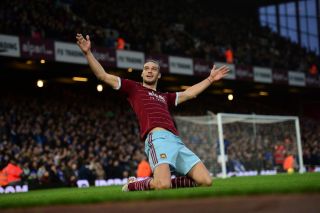 Nigel Pearson's rock-bottom side had their winless run extended to 12 matches as the hosts continued their fine season with a fourth win from their last five Premier League outings.

Carroll maintained his strong return to action from a long-term heel injury by scoring his third goal in as many games after 24 minutes.

A short backpass from former West Ham defender Paul Konchesky presented a gift-wrapped chance to the onrushing striker, who made no mistake with a cool dinked finish.

While the hosts' opener came about from a costly error, their second was a moment of quality from Downing, whose curled strike from long range sealed the points.

Leicester huffed and puffed in an attempt to find a way back into the game but Sam Allardyce's side saw the win out in relatively comfortable fashion and will feature in the top-flight's top four at Christmas for the first time since 1985.

With the unchanged sides on starkly contrasting runs of form recently, West Ham unsurprisingly made the brighter start with Carroll twice threatening in the air early on.

Diafra Sakho was next to go close, firing Kevin Nolan's throughball wide before Leicester grew into the game and forced a number of dangerous crosses.

Despite Jamie Vardy and Riyad Mahrez showcasing pace and trickery, Leicester were unable to fashion clear-cut chances with Carroll spurning the first real opportunity of the game after 23 minutes.

The towering striker met Stewart Downing's cutback inside the area but blazed over from close range under pressure from Marcin Wasilewski.

However, Carroll made amends soon after when he got on the end of Konchesky's woefully under-hit backpass to clip the opener over Ben Hamer.

Buoyed by taking the lead, West Ham continued to put Leicester under pressure although Mahrez tested Adrian from distance on a rare venture forward for the visitors just after the half-hour mark.

West Ham deservedly led at the break however Carroll will have had Allardyce worried early in the second half when he went over on an ankle when closing down Konchesky before stumbling into the photographers' section at the side of the pitch.

However, he was able to continue and watched on soon after as Downing curled home West Ham's second - the England man taking Sakho's knockdown in his stride before sweeping home his fourth Premier League goal of the season.

That all but ended Leicester hopes of salvaging a point or picking up a first league win since September although Pearson will likely take some heart from his side's spirited late efforts.

Substitutes David Nugent and Leonardo Ulloa both brought smart saves from Adrian late on but a comeback failed to materialise, with Leicester left with work to do to arrest their slump as they perilously sit bottom at Christmas.