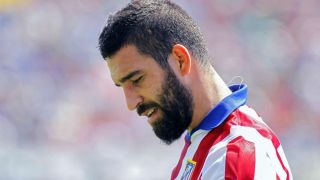 Arda Turan's switch from Atletico Madrid to Barcelona remains uncertain after two presidential candidates suggested the deal may not go ahead.

The Catalan giants announced an agreement had been struck with the capital club for Turkey international Turan on Monday, with Barca able to cancel the €35million deal following their presidential elections if the winning candidate wishes.

Former president Joan Laporta is running for office again in the upcoming election, and he has hinted that the final decision on Turan's future will lie with Eric Abidal – who would be appointed as sporting director if Laporta wins - and coach Luis Enrique.

"We talked with Abidal and if we win, Eric will talk with coach Luis Enrique and then decide whether or not to ratify the transfer once we have studied the contract and all its terms," Laporta is quoted as saying by AS.

"As a fan, I like, of course. He is very good player, no doubt and is consistent with other ideas in our heads, as is Pogba, with whom we have very good relationship with his agent, Mino Raiola."

Meanwhile, Agusti Benedito was critical of the transfer and revealed he will send Turan back to Atletico should he win on July 18.

Benedito suggested presedential incumbent Josep Maria Bartomeu was using the acquisition of the 28-year-old to influence Barca's members ahead of the vote.

He said: "The signing of Arda Turan by the management board represents an improper act of disloyalty from one partner to another who aspires to be president.

"The deal would affect the financial responsibility and economic balance of the first year in office if we win the elections.

"I have never heard Luis Enrique speak of Turan. All I've heard so far is Bartomeu saying Luis Enrique loves him, but the coach has not said anything."