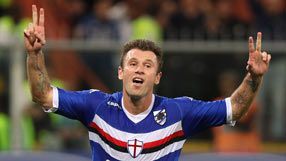 Samp fans displayed banners at Sunday's 0-0 draw with Catania asking president Riccardo Garrone to pardon the Italy forward, who has apologised for his expletive outburst.

Cassano, who looked to have put his bad-boy image behind him having matured markedly in the past two years, lost his temper after refusing to attend a club dinner to be with his ill pregnant wife.

His chances of a recall on Thursday look unlikely, especially given coach Domenico Di Carlo's approval of Sunday's display and Parma's continued woes after a 2-0 loss at Napoli.

"The attackers did a great job, we created loads of chances, limiting them to just a couple of counter-attacks," the former Chievo boss told reporters after Samp stayed sixth.

"Unfortunately we couldn't find that goal and were unlucky."

However, another blank on Thursday will increase the clamour for Cassano to be brought back with Italy coach Cesare Prandelli hoping his main creative force can return to action as soon as possible.

If a pardon is not forthcoming, a move looks to be on the cards for Cassano in January with injury-hit Inter Milan among the clubs pondering whether to bid.

Their need is more immediate, though, with a string of absences forcing coach Rafael Benitez to pick an unorthodox formation in Saturday's 1-1 draw with Brescia while he is even more constrained for Wednesday's trip to Lecce.

Walter Samuel was ruled out possibly for the season after a knee injury against Brescia while fellow defender Maicon will miss around three weeks of action with a thigh strain.

Centre-back Andrea Ranocchia, part-owned by Inter but playing at Genoa, could be one option for January but Ivan Cordoba and Davide Santon look set to stand in on Thursday.

Second-placed AC Milan, who play third-placed Inter at the weekend, welcome Palermo on Wednesday while league leaders Lazio will try to recover from Sunday's derby loss to AS Roma with a visit to promoted Cesena.