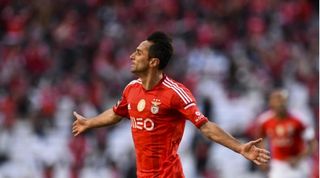 Benfica edged closer to retaining their Primeira Liga title with a 5-0 hammering of Gil Vicente that put them six points clear of second-placed Porto.

Uruguayan full-back Maxi Pereira put Benfica ahead after just 14 minutes, rounding off a slick move with an easy tap-in.

Captain Luisao headed in from a corner early on in the second half, before Lima nodded in Jonas' brilliant delivery with just under an hour played.

Pereira then rounded things off 10 minutes later, scoring his second of the game and moving Benfica closer to league glory.

In the day's late kick-off, Sporting Lisbon eased to a comfortable 2-0 win at home to Nacional, with Fredy Montero's double confirming a top-three finish for Marco Silva's men.