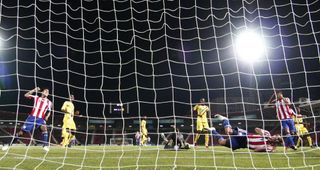 Rui Vitoria's men appear to have blown their own hopes of securing European football after slipping seven points behind fifth-placed Nacional, despite taking an early lead on Friday.

The visitors responded well to Alex's fifth-minute opener, with Bruno Lopes scoring twice and Gerso adding the third to move Estoril to within three points of Porto in third.

Alex's seventh league goal of the campaign gave the hosts an excellent start but Lopes levelled matters before the break with his first of the night.

Lopes was on target again after 69 minutes and Gerso wrapped up the three points deep into stoppage time.

The defeat leaves Vitoria Guimaraes eighth in the table.