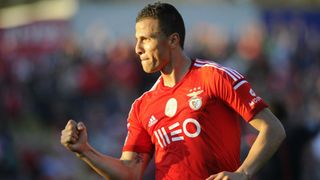 Defeat dropped Arouca to fourth bottom, but they led when Iuri Medeiros opening the scoring after seven minutes.

Benfica had to wait until the 51st minute to level matters through Oliveira Jonas and Lima completed the turnaround shortly afterwards.

By the time the Brazilian struck his second in the 76th minute, Hugo Basto's red card had Arouca playing with 10 men.

Substitute Rui Pedro was the hero for Academica, netting an 85th-minute penalty and completing his double deep into stoppage time.

Boavista also improved their lot at the wrong end of the table by beating Vitoria Guimares 3-1 in Sunday's late game.

Fifth-placed Guimaraes appeared to be handing a further boost to their European ambitions when Henrique Alex scored a penalty midway through the first half.

But Boavista flipped the game on its head during the final half hour, with Marek Cech, Michael Uchebo and substitute Jose Ze Manuel on target.

Maritimo closed to within three points of Pacos de Ferreira with a 2-1 win over their seventh-placed opponents, while Gil Vicente missed the opportunity to move out of the bottom two as they drew 1-1 at Estoril.