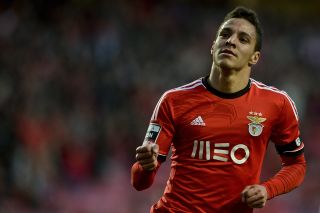 Jorge Jesus' side backed up last weekend's impressive victory over Porto with another 2-0 home win on Sunday.

Rodrigo grabbed both goals, opening the scoring after 19 minutes and doubling Benfica's lead 10 minutes before the break at Estadio da Luz.

Benfica were unable to build on their advantage in the second half, but it mattered little as they held firm to record a fourth straight league win, extending their unbeaten Primeira Liga run to 15 matches.

Porto remain third, just three points from the summit, following a straightforward 3-0 success over Vitoria Setubal at the Estadio Do Dragao.

Javi Martinez and Silvestre Varela fired the hosts in a 2-0 half-time lead, and the game was put beyond all doubt by Carlos Eduardo in the 88th minute.

Elsewhere, bottom side Pacos de Ferreira earned a rare point in a 1-1 draw at Braga.

Nuno Coelho put the home side ahead after quarter of an hour at the Estadio AXA, but Bebe restored parity on 72 minutes with a sensational volley.

Belenenses remain mired in relegation trouble after a 1-0 defeat at Rio Ave.

It looked as though the visitors were on their way to a valuable draw until Luis Gustavo notched the winner in the 89th minute.

Belenenses have now gone nine league matches without a win and only sit outside the relegation zone due to their head-to-head record against Olhanense.

Sergio Conceicao's men had been frustrated by stubborn defending until Djavan Ferreira's 90th-minute winner, which condemned Gil Vicente to a fifth straight defeat.