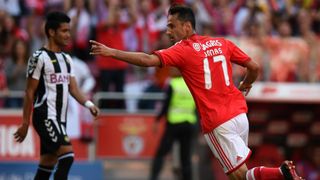 Nacional sported an alternate formation against Jorge Jesus' men, opting to line up in a 4-4-2 instead of their usual 4-3-3 - but it did not stop the league leaders from striking early.

Maxi Pereira and Eduardo Salvio combined in the lead-up to Benfica's opener, scored by Jonas in the 21st minute.

Nicolas Gaitain and Eliseu were involved in producing Benfica's second, with Lima getting on the end of a cross on the half-hour mark as the champions looked ominous.

Jonas added his second in the 59th minute - lashing home from outside the area to find the top-right corner and put Benfica out of sight - before Nacional's Tiago Rodriguez stuck a consolation goal with 16 minutes to play.

Porto have a game in hand on Benfica, as they host Estoril on Monday - but the champions' bid for a 34th title in the Portuguese top flight strengthened with the victory, and saw them respond to their 2-1 loss to Rio Ave.

Third-placed Sporting Lisbon were held to a 1-1 draw at Pacos de Ferreira.

Islam Slimani's opener in the 30th minute for Marco Silva's European-placed outfit was cancelled out by Rodrigo Galo's goal with 15 minutes to play.

Lisbon's winning streak came to a halt at three matches, but they remain seven points clear of Sporting Braga.

Penafiel were denied late in a 2-2 draw at home to Boavista, in a crushing result for the cellar-dwellers.

Needing victories to propel themselves out of the bottom two, Penafiel were on track when two goals in 15 second-half minutes saw them arrest a deficit.

Boavista had struck in the shadows of half-time via Carlos Santos, but Penafiel were level when Aaron Appindangoye got the final touch into his own net - and Joao Martins scored for the struggling hosts in the 67th minute.

Belenenses boosted their hopes of gaining a European spot with a 2-0 win at home to Moreirense.