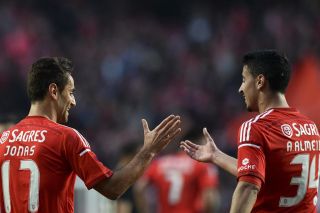 Jonas put the leaders in front after 13 minutes at Estadio da Luz on Saturday, the Brazilian forward getting on the end of an inviting free-kick from Nicolas Gaitan to score his third goal in as many games.

Ola John then marked only his third Primeira Liga start of the season by scoring his first goal since September nine minutes into the second half, lashing home at the second attempt after his first attempt was blocked.

Gaitan completed the scoring from close range a minute from time as the champions' ominous form continued and they have now kept six consecutive clean sheets in the Primeira Liga.

Third-placed Vitoria are now 12 points behind Jorge Jesus' pacesetters after winning only one of their last five league matches.

Jackson Martinez scored his 19th goal of the season as Porto beat Belenenses 3-0 at Estadio Do Dragao.

The prolific Colombia striker struck for a third game in a row with a header from close range 10 minutes in and there was no way back for the visitors when Oliver Torres doubled Porto's lead with a clinical left-footed finish two minutes after the break.

Evandro scored his first Porto goal in stoppage time to add insult to injury for toothless Belenenses, who have now failed to score in their last six Primeira Liga games.

Substitute Vasco Rocha struck four minutes into time added on to salvage a 2-2 draw for Pacos de Ferreira at Academica in the other game to be played on Saturday.

Academica led twice courtesy of a Marcos Paulo penalty and Mineiro's strike eight minutes from time, but Rafael and Vasco denied the home side a first win since September.