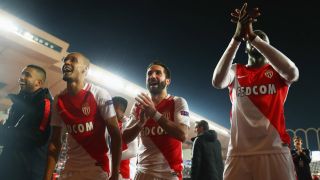 Prince Albert II hailed Monaco's "extraordinary" triumph after a 2-0 win at home to Saint-Etienne secured their first Ligue 1 title since 2000 on Wednesday.

Goals either side of half-time from Kylian Mbappe and Valere Germain at Stade Louis II saw Leonardo Jardim's side to a comfortable victory over mid-table Saint-Etienne.

Monaco's eighth Ligue 1 title snapped a four-year spell of dominance from dethroned champions Paris Saint-Germain and ended the club's 17-year wait to lift the trophy again, much to the delight of the prince.

"After an extraordinary season, this final victory at home is the culmination of many things," Prince Albert II told Canal+.

"Four and a half years ago we were in Ligue 2, now we find ourselves champion of France.

"This group is extraordinary, talented and very good-spirited, led by a great coach. It is a work of a whole team, but also of the staff, and the supporters.

"I think this team has a tremendous talent with young people who can still progress."

Once the celebrations are over, Monaco will face a battle to hang on to stars including Mbappe, Thomas Lemar and Bernardo Silva and Prince Albert II accepted it will be difficult to retain their top talent amid interest from Europe's elite clubs.

"They cannot all stay," he added. "There will necessarily be some departures."