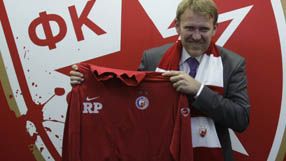 The two teams, who tend to spark crowd trouble when they meet, clash in a Serbian Cup semi-final first leg on Wednesday and the fixture will be the first real test of Prosinecki's credentials since he took over in January.

"I would like to see a capacity crowd and rival fans cheering their teams without fighting each other or causing any sort of trouble," he told Reuters in an interview.

"It should be an enjoyable afternoon for everybody. We hope our fans will be in full swing because they have been the team's 12th man and all I can promise is we will go out there and try to play our best football.

"The lads are fit and raring to go, we are tactically ready to match Partizan in every department and we need a result to give ourselves a confidence boost," added Prosinecki.

"We are aware we face a very good team so I expect a cracking game but no matter who wins we all hope it will be an afternoon to remember for all the right reasons."

Prosinecki's plea should not fall on deaf ears after UEFA president Michel Platini visited Belgrade last month to warn the Serbian authorities their national team and clubs could be expelled from Europe if supporters continued to misbehave.

Platini's caution came after Serbian fans rioted during their side's Euro 2012 qualifier in Italy in October, forcing the game to be abandoned after six minutes when they threw flares at home players, fans and police.

Prosinecki, who won the European Cup with Red Star in 1991, took over in January after spending four years as assistant to Croatia coach Slaven Bilic.

"There is always pressure at Red Star, whether you are a coach or a player, because this club is used to winning silverware and expectations are huge," said Prosinecki.

"A win would mean a lot to me because I have a very good record against Partizan as a player but I think it's more important for the players to get a confidence boost because they are the ones who have to grind out results."

Partizan, five points ahead of Red Star in the 16-team first division as they chase their fourth successive league title, are likely to start in a familiar 4-4-2 formation.

Prosinecki is set to field an adventurous 4-3-3 line-up, with Aleksandar Jevtic replacing Andrija Kaludjerovic up front after the latter defied team orders in Saturday's 2-0 win at Jagodina when he took a penalty saved by the home keeper.