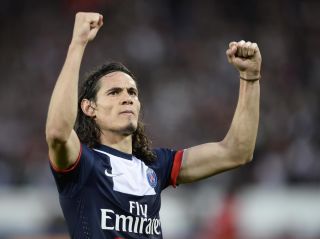 And despite training ahead of the clash against the Greek side, which will see PSG secure top spot in Group C with a win or a draw, Blanc is not prepared to gamble on the former Napoli man's fitness.

"Against Reims, I would not take the slightest risk," he said.

"He was given rest Sunday. With the time difference, he was tired.

"He did a very good session yesterday, but with this lag, it is not clear. There is Edi, but we also count on all the other players to win this match."

Blanc went on to say he is not resting on his laurels ahead of the clash at the Parc des Princes, even though his side ran out 4-1 winners in the reverse fixture in September.

"There is always stress," he added. "We know what we have to do tomorrow.

"Tomorrow is an important match. It is going to apply the pressure to qualify for the next round, and if possible finish first. Pressure is part of the job there."

Recent reports in France have suggested that Blanc will be offered a lucrative contract extension after PSG's excellent start to the season.

The former France coach, whose current deal expires at the end of next season, is yet to taste defeat as PSG boss, but refused to be drawn on his future.

"I have no answer to this question," he stated. "This has nothing to do with Olympiacos.

"I read it in the press this morning. What interests me is tomorrow evening. My personal future interests me, but I don't have to talk about at the moment."