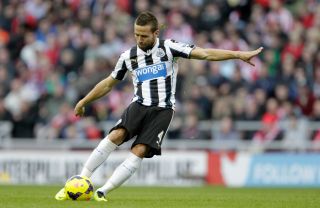 The 28-year-old France international moves to the Ligue 1 champions for a fee believed to be in the region of £20 million.

Cabaye, who joined Newcastle from Lille in June 2011, has been heavily linked with a switch away from St James' Park throughout the January transfer window, with Manchester United also thought to be interested in his services.

The midfielder reportedly wanted to sign for Arsenal ahead of the 2013-14 season, and did not feature in Newcastle's first two Premier League fixtures of the campaign against Manchester City and West Ham after the Emirates Stadium outfit had a bid for him rejected.

However, Cabaye went on to make 19 top-flight appearances for Alan Pardew's side this term, scoring seven goals.

In total, Cabaye made 93 appearances for Newcastle, netting 18 times.