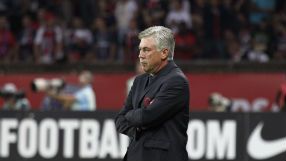 PSG, searching for a first top flight title since 1994 and who have spent more than €200 million on transfers since being taken over by Qatar investors last year, were humbled 1-0 at Porto on Wednesday.

"We don't have enough experience to come here and get a good result against such a team," coach Carlo Ancelotti (pictured) told reporters after the Champions League disappointment.

"We need to recuperate before the Marseille game," the Italian said of the 1900 GMT 'clasico'.

Marseille lead the table with 18 points from seven games and have a three-point lead over second-placed PSG but their perfect start was blown away in an embarrassing 4-1 defeat at Valenciennes last weekend.

More good news for PSG and Ancelotti is that Marseille host AEL Limassol in the Europa League later on Thursday, meaning they will have one day less than PSG to prepare for the game.

Sweden striker Zlatan Ibrahimovic leads the scoring charts with seven league goals but is not happy with his play of late.

"Right now, I'm not playing at the level I wish I would be," he said.

PSG will likely be without Argentine forward Ezequiel Lavezzi, who picked up a muscle strain against Porto after only seven minutes on the pitch.

However they will at least be able to rely on the support of their away fans after the club reduced the price of following the team to Marseille from 340 to 150 euros.

Champions Montpellier, who snatched a last-gap 2-2 draw at Schalke 04 in the Champions League on Wednesday, will look to continue their return to top form when they entertain Evian Thonon Gaillard on Saturday.

Montpellier lie in 13th place but they beat Nancy 2-0 in their last league game and Wednesday's performance in Germany showed some dramatic improvements.

Fourth-placed Lorient, the only unbeaten team in Ligue 1 with PSG and Girondins Bordeaux, entertain third-placed Olympique Lyon on Sunday.