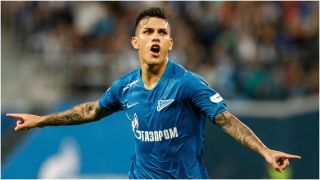 Paris Saint-Germain have completed the signing of Leandro Paredes, beating Chelsea to the signature of the Zenit midfielder.

Paredes was reportedly a top target for the Premier League side but he has instead opted to join the Ligue 1 leaders for a reported fee of €45million.

PSG head coach Thomas Tuchel had made clear his desire to add a midfielder in the January transfer window, with Lassana Diarra and Marco Verratti both injured.

Adrien Rabiot is also unavailable as the France international has been ruled out of selection contention due to his ongoing contract stand-off, resulting in Brazilian defenders Marquinhos and Dani Alves filling in as makeshift midfielders.

But Tuchel has now got his man as Paredes, who joined Zenit from Roma in 2017, has signed a four-and-a-half-year deal at the Parc des Princes.

"After my previous experiences in Italy and Russia, I now have this fantastic opportunity, not only to discover a new league, but above all one to wear one the most prestigious club jerseys in the world. I'd like to thank the chairman and the coach for the confidence they have shown in me by signing me.

"We all know the extraordinary sporting dimension of Paris Saint-Germain, its players and staff. I share the same high ambitions and I will do everything I can to give my club what it expects of me as a midfielder. I also look forward to the passionate atmosphere of the Parc des Princes, as I grew up with football fever in Argentina."

¡Hola @LParedss! We have a message for you from Ángel Di Maria...!

"Leandro brings with him the traditional strengths of Argentinian football - a fighting spirit and excellent technical skills. He will bring a lot to our midfield and I am sure he will fit quickly into our coach's well-organised and ambitious team.

"Leandro's arrival will keep the momentum, both on the pitch and among our supporters, ahead of the major events coming up. Exciting times lie ahead."

Paredes is PSG's first signing of the January transfer window, but Tuchel's squad could be boosted further before Thursday's deadline.

Watford midfielder Abdoulaye Doucoure is reportedly a target and Everton boss Marco Silva confirmed on Monday that the Toffees have rejected a bid from PSG for Idrissa Gueye.

Reports have claimed Gueye has handed in a transfer request in a bid to force a move.