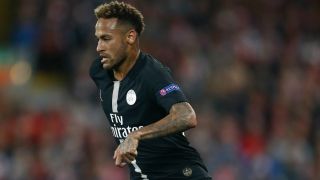 Thomas Tuchel heaped praise on hat-trick hero Neymar and labelled him among the best in Europe, though the Paris Saint-Germain head coach was quick to hail the collective effort of his side after their Champions League rout of Red Star Belgrade.

There was a gulf in class in Paris, where Ligue 1 holders PSG dismantled Red Star 6-1 thanks to Neymar's three-goal haul on Wednesday.

PSG made a losing start in the Champions League, beaten by Liverpool on matchday one, however the French giants opened their Group C account midweek.

Neymar scored twice in quick succession before completing his hat-trick with a stunning free-kick nine minutes from the end, while Edinson Cavani, Angel Di Maria and Kylian Mbappe were also on target.

Speaking to reporters afterwards, Tuchel said: "Neymar is one of the best players in Europe. We have several of the best in our team – not just Neymar.

"We've won lots of games because we have the best players, but also because we were the best team. That's very important.

"When you're in good spirits, it's easier to stay relaxed. It's the same with Neymar. He's confident in his form and his game – and you can see that.

"He's very good at the moment. He's nearly at 100 per cent of his form and physically as well."

"We've improved our intensity in every game and you saw that tonight," added Tuchel. "We scored lots of goals after winning the second ball or losing the ball. It's nothing when you just have possession. We want to play with intensity as well and close down spaces."

"We watched lots of videos of Crvena Zvezda and saw they can defend with a lot of aggression and organisation," Tuchel continued.

"It's difficult for other teams to score. They hadn't lost for 34 games. You might think it was easy, but it's never easy."

Red Star – back in the Champions League after 26 years – held Napoli in their opener but the Serbian champions were outclassed by PSG in the French capital.

"Congratulations to Paris," said head coach Vladan Milojevic. "They are clearly on a greater level than we are right now. From a defeat like this, which is very unpleasant, we should take as much experience as possible because we saw football at the highest level. Let's not judge us on this loss, my players still have much to show."