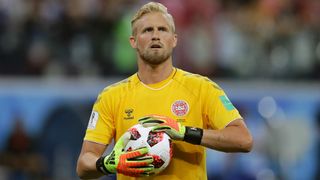 Leicester City manager Claude Puel says the club has not received any offers for Kasper Schmeichel, despite speculation linking the goalkeeper with a move away from the King Power Stadium.

The 31-year-old, who was a member of Leicester's remarkable Premier League title-winning team in 2015-16, was recently at the World Cup as Denmark were eliminated by Croatia on penalties.

Since then, the Foxes have signed Danny Ward from Liverpool for £12.5million, but Puel is determined to keep Schmeichel at the club for the upcoming season.

"Of course Kasper is a very important player for us. He had a very strong World Cup," he said after Leicester's 4-1 win over Notts County in a pre-season friendly.

"We need Kasper, with his character, his performance and his consistency.

"There is no problem with this. There is a lot of speculation at this moment, it is normal."

Puel also said Ward was signed by the club to provide competition to Schmeichel and not to replace him.

"I think he can bring more competition to the squad and more possibilities," said Puel.

"It is a good thing to have competition between players in the squad to develop desire.

"It gives good focus and concentration."