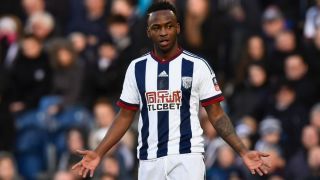 Berahino has scored three goals in 20 Premier League appearances this season but has failed to start a league game since October, with off-field problems and rumours over his future affecting his playing time at The Hawthorns.

Clarke suggested the striker looked "heavy" after West Brom's FA Cup tie against Peterborough United and believes "it would certainly serve him better if he lost a little bit of weight".

"I don't think that's unfair," Pulis said of Clarke's comments. "Steve's not far off the mark.

"Everybody believes their own eyes. It's nice for people to actually say what they see instead of what they perceive they're seeing.

"But he needs to play the games to get there.

"Is it a vicious circle? Yes, but that's what we've been left with and what we've got to get on with."

West Brom are 14th in the league standings, one point behind Chelsea and six above the relegation zone, ahead of their trip to face Everton on Saturday.