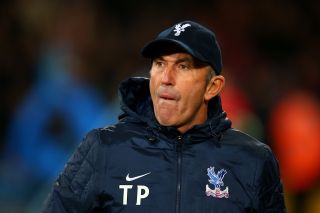 West Ham had the majority of the play in the first half but failed to turn possession into goals, and were duly punished by Marouane Chamakh's glancing header.

The hosts' position could have been improved in the second half as Cameron Jerome and substitute Jimmy Kebe both went close, yet it mattered little as Palace clung on to secure a vital three points and move off the foot of the Premier League table.

Pulis praised the application of his charges, while suggesting they have room for improvement.

"I was pleased with the result; I think in terms of the performance we can do a lot better than that," he told BT Sport.

"The first 20 minutes I thought we were very tentative and very much on the back foot, but we've seen it through and the lads were absolutely fantastic out of possession of the ball.

"They worked very, very hard and when you look at the game we've probably created the more clear-cut chances."

"It's a great start; it's very important we stay as close as we can to the pack (of teams above the relegation zone). The (transfer) window opens (soon) and we can do some work, just to stiffen the squad up and maybe just bring a little bit more quality that we'll need.

Pulis - who has replaced Ian Holloway at Selhurst Park - reserved special praise for strike duo Cameron Jerome and Chamakh, and says the squad have shown great commitment since he took the reins.

The Welshman added: "Him (Jerome) and Chamakh in the last two games have been exceptional in terms of the work rate and the pressure they've put on the defenders they've played against.

"Fingers crossed - it's a big game on Saturday (against Cardiff City). We go away with a lot more confidence, (and) hopefully we get the same result we did tonight.

"They're a fantastic group of players; they work ever so hard; they're ever so diligent around the place. I think you've seen today when things weren't going well they were organised, worked hard and were content to do that."