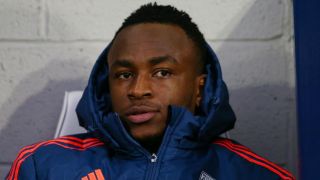 West Brom are yet to receive a firm January offer for forward Saido Berahino, according to Tony Pulis.

Berahino has endured an uneasy relationship with head coach Pulis and threatened to go on strike when a September deadline-day approach from Tottenham was rejected.

Although such a stand-off was ultimately averted, Berahino has been restricted to just eight Premier League starts this season.

Newcastle United are currently the Premier League club most closely linked to the 22-year-old amid a clutch of reported potential suitors.

Berahino was left out of the West Brom squad for Tuesday's FA Cup third-round replay win at Bristol City, heightening speculation that a move was imminent, but Pulis stated the player's absence was due to a stomach bug.

"The club has not received any offers at all so everything is pure speculation and people talking, you can't stop people talking," he told a news conference ahead of Saturday's match against local rivals Aston Villa.

"Unless he's sold now or tomorrow, it's going to go through to the last days.

"Saido had a tummy bug in the week and we couldn't play him. He will be involved tomorrow."

England goalkeeper Ben Foster made his second appearance of the season at Ashton Gate following 10 months on the sidelines with a serious knee injury and Pulis conceded he has a difficult decision to make over whether to retain Boas Myhill in goal for Premier League action at the weekend.

"It's brilliant to have an England international goalkeeper back," Pulis said. "Bo has been fantastic. I've got a big decision to make.

"We have a massive game Saturday against Villa. They're four games unbeaten and have struck a bit of form."