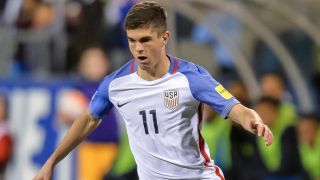 Borussia Dortmund midfielder Pulisic, 17, only has one cap to his name but made an impression with his two goals in nine games in the Bundesliga this season.

Klinsmann's squad is one with few surprises with the one-cap Pulisic joined by the experienced heads of Michael Bradley, Jermaine Jones, Tim Howard and Clint Dempsey.

One inclusion that did raise some question marks, however, was the decision to pick Chris Wondolowski over Jordan Morris.

While San Jose Earthquakes veteran Wondolowski has scored seven goals in 11 MLS matches so far this season, 21-year-old Morris was expected to make the cut after impressing in his debut season with Seattle Sounders.

Hosts USA kick-off the special-edition tournament on June 3 against Group A opponents Colombia, before facing Costa Rica and Paraguay on June 7 and 11 respectively.