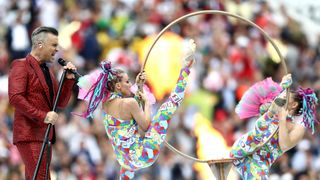 The World Cup was ushered in on Thursday after a short ceremony that featured the unlikely duo of British pop star Robbie Williams and Russian president Vladimir Putin.

Williams initially took centre stage ahead of the tournament opener between the hosts and Saudi Arabia by performing three of his greatest hits, one alongside Russian soprano Aida Garifullina.

Putin then addressed the crowd at the Luzhniki Stadium and the millions watching around the world, saying: "We are sincerely happy to host the World Cup in our country.

"Football is truly loved here. Russia is an open, hospitable and friendly country. Whatever traditions we hold, football brings us together in one single team and we are united by our affection for this spectacular and vibrant game.

"I wish all the teams success and an unforgettable experience to fans. Welcome to Russia."

"Thank you President Putin and thank you Moscow."