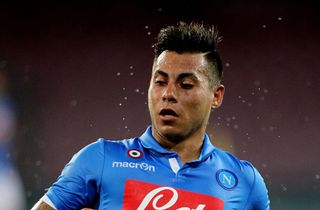 The Chile international moved to Napoli from Universidad in 2011, but failed to hold down a regular starting spot while in Italy.

After a loan spell at Brazilian outfit Gremio in 2013, Vargas made a temporary switch to Valencia for the second half of last season, scoring five times in 25 appearances in all competition.

Vargas featured for Chile at the World Cup, scoring once in four matches as Jorge Sampaoli's side bowed out in the last 16 after a penalty-shootout defeat to hosts Brazil.

QPR confirmed on Thursday that the 24-year-old has joined until the end of 2014-15, with manager Harry Redknapp eulogising over the player's all-round qualities.

"Eduardo is a quality player," he said.

"He's sharp, he's bright, and he's very lively on and off the ball.

"I really liked the look of him during the World Cup and he's a player our scouts have been looking at for some time.

"He's been on our radar for a long time now and we've had reports on him, from our scout over there, for a while.

"We've had him watched a lot, over the last year or so, and the feedback has been very positive."

QPR started life back in the Premier League with a 1-0 defeat at home to Hull City on Saturday, and Vargas is hopeful he can help keep the side in the top flight.

"I have come here to do as much as I can for QPR in the Premier League," he said.