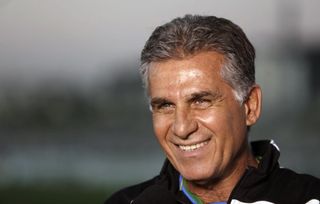 Widely tipped to not surpass a Group F consisting of Argentina, Bosnia-Herzegovina and Nigeria, the Iranians open their tournament against their African opponents on Monday.

Queiroz, a former boss at Manchester United, said Iran's aim was to capitalise on opportunities handed to them by opponents - who will all be tentative at the expectation they will down the group's supposed easy beats.

"The most important is the first game," he said.

"No matter if it's against Argentina, Indonesia or Japan, we have to play as a team.

"We must treat them as they are, no more, no less. There are no perfect teams in the world. We have to be in the right places at the right time.

"Our goal is simple: if they make a mistake, we will be ready to capitalise. We're playing the best teams in the world."

Queiroz said he will implore his players to enjoy the moment, with Iran featuring at a World Cup finals for a fourth time.

"We cannot miss this opportunity to face them with pleasure and enjoyment. It's just a game," Queiroz said.

"(There) are 90 minutes, defence, attack, lose the ball, winning the ball. Of one thing I am sure: we must be ready.