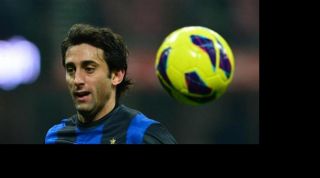 The Argentine started his career with the Avellaneda-based outfit, who compete in the Primera Division in his homeland, and despite signalling his intent to extend his contract at San Siro earlier in the season, could now be on the verge of a return to his former club.

"Yesterday (Sunday) we had a meeting here in Milan," Blanco is quoted as saying by Gianlucadimarzio.com. "We spoke and we are confident that Diego will return.

"The fans at Racing are waiting for him.

"We will reconvene soon, once the league season has finished."

Milito won Serie A with Inter in 2009-10 and has scored two goals in 14 league appearances this season.