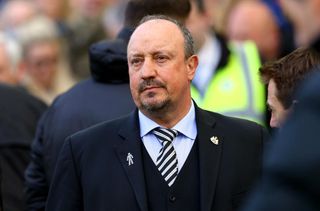 Newcastle boss Rafael Benitez has given the clearest indication yet that he is ready to extend his stay at St James’ Park after positive talks this week.

The 59-year-old Spaniard, whose existing deal is due to expire on June 30, revealed he had spoken to managing director Lee Charnley and hinted that he had been encouraged by what had been said.

Asked if there had been any progress on his contract, Benitez replied: “Yes. I was talking with Lee Charnley this week and we will let you know as soon as we have more news.

“At the moment, it’s just we have had another talk and we’ll continue talking.”

Asked further if the talks had been positive, he replied: “Yes. I can say yes, it seems that things are at least moving forward, and we will see if something is right at the end.”

The news will give fresh hope to fans desperate for Benitez to stay longer than the three years for which he was initially contracted after he guided the club back into the top flight at the first attempt in the wake of relegation, and has since secured its status for two successive seasons.

He is keen to receive assurances over owner Mike Ashley’s ambition – something which is currently limited by his intention to sell Newcastle – although he is adamant business alone will not dictate his decision.

Benitez said: “I know the fans are supporting me and the fans are trying to convince me to stay and they try to go for the emotional way, like they did the first year.

“I know that and I appreciate that, I am really pleased with that because I am happy in the city, I am happy here and as I have said before, the staff, everybody is doing a very good job and we are very comfortable here.”

In the meantime, Benitez will send his team into battle with former club Liverpool, whom he guided to Champions League glory during a trophy-laden six-year reign, on Saturday evening knowing victory for the Magpies could end the Reds’ title dream for another season.

He said: “We are professional and we have to do our job. My relationship with the city, with Liverpool, with the club, with the fans, is there.

“I was there six years, we won some trophies and we have good memories. I think everybody understands that we are professionals and we will do our best, that’s it.”