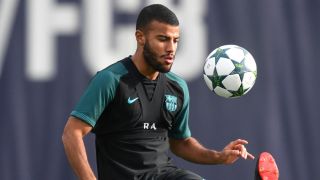 Rafinha was excused from training by Barcelona on Saturday, with Inter reportedly closing in on a loan deal for the midfielder.

The 24-year-old returned to action as a substitute during Wednesday's Copa del Rey defeat to Espanyol following a second serious knee injury in as many seasons.

Nevertheless, Barca boss Ernesto Valverde does not believe first-team opportunities will be plentiful for Rafinha, with a fresh start seemingly inevitable for the academy product.

"He's not training today. He's been given permission to sort out a contractual matter," Valverde told a news conference ahead of Sunday's LaLiga trip to Real Betis.

"He is a player who has been injured for a long time and at this stage of the season he is not going to be getting the number of minutes that perhaps we would have wanted.

"We'll see how things work out, but he's been out of action for a long time.

"He's always given 100 per cent in training. He came on [against Espanyol] because I thought he would be useful in that moment of the game."

Inter are understood to have agreed an initial loan move for Rafinha, with a compulsory purchase option of €35million should the Serie A team qualify for the Champions League.

"It’s very difficult to get into the Barcelona side as there are so many players. He also had the bad luck of getting that knee injury over the last two years.

"He just wants to play, feel happy and do what he loves at an excellent club like Inter.