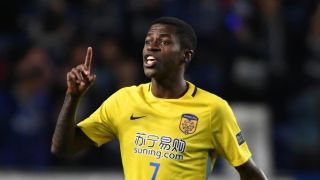 Former Brazil international Ramires is keen on the idea of joining Inter as he considers a move away from Chinese Super League club Jiangsu Suning.

Ramires has spent the last two years in the CSL after Jiangsu paid a reported £25million to sign him from Chelsea.

But the 2014-15 Premier League winner, who has not played for the national team since his time at Stamford Bridge, is open to a return to Europe.

Inter have long been linked with moving for the 30-year-old and Ramires is eager to link up with Luciano Spalletti's side, with the San Siro club and Suning sharing the same parent company.

"If Inter talked with my agent it's positive, if a great club shows interest in me then it means I'm doing well," Ramires told Sky Sports Italy.

"I'd be happy to go to Inter but I'm still a Jiangsu player and I have to focus on preparing with them, I hope I'll be ready to play straight away.

"The issue of my wage doesn't just depend on me, there are several parties and the negotiations must satisfy all of them.

"I hope we can reach an agreement and, who knows, go to Inter. I haven't talked to Spalletti, I never met him when Inter came to China."