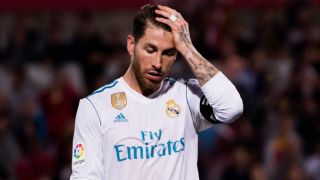 Real Madrid captain Sergio Ramos is hopeful the political situation in Catalonia does not result in Barcelona's withdrawal from La Liga.

Catalonia's independence referendum at the start of October saw 90 per cent of voters favour secession from Spain.

The official declaration of Catalonia's independence came on Friday, with Spain's prime minister Mariano Rajoy then sacking the Catalan government, with charges of rebellion, sedition and misuse of public funds set to be brought against them.

Barcelona, who have regularly urged the parties involved to negotiate and open discourse to resolve the situation, do not appear to be in any immediate danger of having their involvement in La Liga threatened.

But in the long term there remains a degree of uncertainty, and Ramos hopes the political climate does not impact on football maters.

"It is difficult to imagine La Liga without Barcelona," he told Onda Cero.

"I would like Barcelona to continue in La Liga and that nothing changes.  The situation in Spain hurts me because I think we are stronger together, and it hurts me that this is the image of Spain being seen worldwide.

"[But] I'm more worried that our [Spain's] national anthem has no lyrics than I am about the current situation in Catalonia."