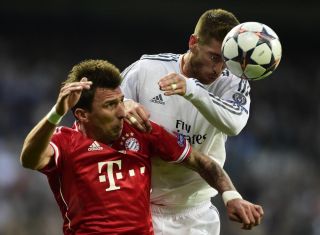 Karim Benzema's strike after 19 minutes at the Bernabeu on Wednesday handed Real a slender 1-0 advantage ahead of the return meeting at the Allianz Arena next week.

The Spanish giants were forced to soak up plenty of pressure from the defending European champions, but they stood firm to seize advantage in the tie.

But despite having denied Bayern a crucial away goal, Ramos maintains that Real must go for the win in Germany, suggesting that a one-goal advantage may prove insufficient.

"I think we have to go for the victory in the second leg, because the 1-0 lead may not be enough," he said.

"We will continue studying the opponent to attempt to get through to the final.

"It was a good match. It was tough, and very, very intense against an opponent who likes to dominate possession.

"We've had to resort to a pressing game just to attempt to steal the ball in the attacking half."