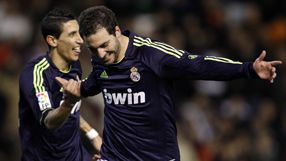 The signs of a revival, sparked by doubles for Cristiano Ronaldo and Angel di Maria and the creativity of playmaker Mesut Ozil, come at a crucial time with a Champions League last-16 tie against Premier League leaders Manchester United looming next month.

Their best performance of the season pushed the reports of dressing room disharmony which have dominated coverage of Jose Mourinho's side in recent months off the front pages and had sports daily As proclaiming: "The great Madrid is back".

Real tore into Valencia at the Mestalla and scored all five of their goals before half-time, racking up their biggest lead at the break since Mourinho took over as coach in 2010.

Ronaldo and Di Maria were close to unstoppable on the counter-attack, while striker Gonzalo Higuain, who kept Karim Benzema on the bench and opened the scoring in the ninth minute, looked back to his best after recently returning from injury.

"It was a match that we made easy for ourselves," Di Maria said in a post-match interview with TV broadcaster Canal Plus.

"We went out to press forward as we have been doing and we got a lot of goals," added the Argentina international, who has come under fire recently for some lacklustre performances.

"I had a great match. It says a lot and maybe shut a few mouths."

"They were a very superior opponent and that means you are helpless as you cannot do anything about it," he told reporters.

"They gave us a good kicking which we did not expect," he added. "Now we have to pick ourselves up and not allow this to affect the good run we were on."

It was Real's second victory of the week against Valencia after Tuesday's 2-0 Cup quarter-final first leg success at the Bernabeu and they return to the Mestalla for the second leg on Wednesday.

For all the euphoria, the victory only trimmed the gap to leaders Barcelona, who lost 3-2 at Real Sociedad on Saturday, to 15 points and Real are still seven behind city rivals Atletico, 2-0 winners at home to Levante on Sunday.

However, their electric performance at Valencia, who are also through to the Champions League last 16, will give them plenty of confidence that the 10th European crown that has eluded them since 2002 is within their grasp.