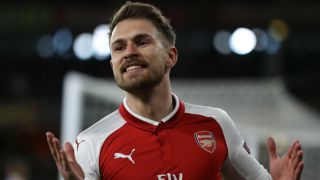 The former Paris Saint-Germain boss was appointed as successor to Arsene Wenger this month, with chief executive Ivan Gazidis describing him as the "ideal person" to take the club forward.

Ramsey has only a year left on his contract and has failed to come to an agreement over an extension.

However, his optimism around Emery's appointment suggests he could be prepared to commit his future to the Gunners.

Asked if he was looking forward to working with Emery, he said: "Of course. I haven't spoken to him at all yet, but I think it's an exciting time for the club.

"I can't wait to get back there now."

Ramsey was speaking after Wales' goalless friendly draw with Mexico, in which he admits he had to play through the pain of an ankle injury after captain Ashley Williams was forced off 21 minutes in.

"I rolled my ankle but I'd taken the armband from Ash and I thought I had to stay on and do my bit for the team," said the 27-year-old.

"It wasn't the best surface in the world and my ankle is a bit sore.

"Hopefully, there will be no lasting damage and it will settle down over the next few days."