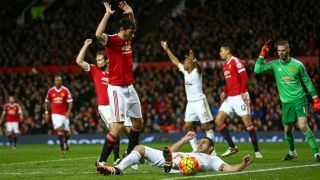 Swansea City defender Angel Rangel admits he deserved his yellow card for simulation in their 2-1 loss to Manchester United on Saturday.

Rangel went down in the box from a Matteo Darmian challenge just after the hour-mark as Swansea pushed for an equaliser against United.

Referee Jonathan Moss booked the Spaniard for diving, which Rangel admitted to doing after the game.

"I had a bit of a fight with [Callum] McManaman last week because he dived, but I did dive," he said. "If it’s a dive, it’s a yellow card, so that is clear.

"He [Darmian] put his foot in and he touched my left foot, but it wasn't enough contact for me to go down.

"I was losing my balance and I thought, 'It’s not like really cheating' but I was falling already so I just tried to claim it. It was like a gamble.

Swansea are just two points above the relegation zone and in danger of going down to the Championship after five seasons in the Premier League.

"Everyone would be devastated to get relegated," Rangel said. "We know how difficult it is to go back up so we don’t want to be in the Championship."