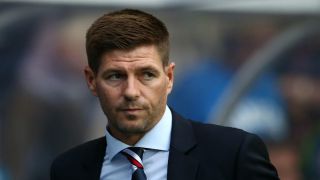 Steven Gerrard's reign as Rangers manager got off to a winning start as his team eased past Shkupi 2-0 in the first leg of their Europa League first qualifying round tie at Ibrox.

Former England international Gerrard signed a four-year contract to take charge at the club in May, despite having no previous senior managerial experience.

Victory never looked in doubt for the dominant home side with a Jamie Murphy strike and late James Tavernier penalty setting them up nicely for the return fixture in Macedonia next Tuesday.

They started brightly, but could have fallen behind inside the opening 15 minutes when Blagoja Ljamcevski's whipped effort from outside the penalty area clipped the top of Allan McGregor's crossbar.

Rangers responded well to that scare and scored the opening goal after 23 minutes, Murphy driving into the area and drilling in a low left-footed strike that goalkeeper Suat Zendeli might feel he should have done better with.

FULL TIME: Rangers 2-0 FK Shkupi (Murphy 23 Tavernier 90)Goals from and give the Gers a two-goal advantage ahead of next week's second leg in Macedonia. July 12, 2018

The hosts should have been out of sight before half-time, but squandered a host of clear opportunities.

Josh Windass was guilty of a particularly glaring miss midway through the second period, heading over just six yards out from Tavernier's teasing cross.

They did grab the second their dominance deserved two minutes into stoppage time after Ron Broja brought down Murphy in the area, Tavernier coolly slotting the resulting spot-kick home to cap a memorable night for Gerrard.