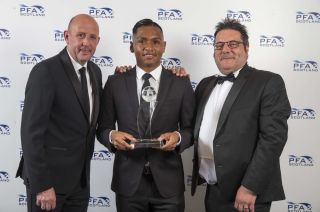 Gary McAllister admits he and Steven Gerrard have a dilemma over who plays up front against Celtic on Sunday.

Alfredo Morelos had to make do with a 74th-minute introduction as he returned from a four-match ban in Sunday’s 1-0 win over Hibernian.

Jermain Defoe had kept him out of the starting line-up after scoring twice during his suspension and the 36-year-old hit the winner against Hibs.

Morelos has scored 29 goals this season but has not scored in eight appearances against Celtic, the last of which saw him sent off for elbowing Scott Brown.

McAllister said: “He should be, he’s had quite a bit of time off, which is unfortunate.

“But the facts are we have someone who has come in and done fantastically well.

“So we have two proven strikers, two strikers who are at different times of their career. One can learn from another, most definitely.

“But we need competition for places and we have two top number nines.

“It’s a nice dilemma, it’s a nice problem. You need that sort of competition right through the team.”

McAllister admits 22-year-old Morelos has not been able to hide his frustration at being sidelined following his fifth red card of the season.

“He has worked hard but he has been frustrated,” he said. “He is very rarely injured, touch wood, he is very robust, so when he is on the sidelines he is just frustrated that he is not on the pitch.”

The former Scotland midfielder feels Morelos will benefit from watching Defoe in action.

McAllister added: “I think Jermain is key for all forward-thinking players at the club, just the way he navigates from Monday through to Friday.

“He’s a top pro and a perfectionist, and that’s why he’s playing at the age he is, playing at at the level he is playing at.”

Morelos received an award after his comeback on Sunday when he collected the PFA Scotland goal of the season prize for his measured finish in a 4-2 win against Aberdeen at Pittodrie.

McAllister said: “For me it was a world-class goal. I loved the way he just manoeuvred his body and just passed it in, rather than a lot of goals he scores when he goes for power.”