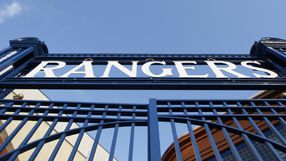 Rangers, who are in administration and looking for a buyer, were sanctioned for bringing the game into disrepute and fined 160,000 pounds for three further rule breaches all relating to their recent financial woe.

Whyte faces fines totalling 200,000 pounds after he was found guilty of bringing the game into disrepute and three additional rule infringements.

Rangers went into administration in February after running up a debt of nine million pounds in unpaid taxes since Scottish businessman Whyte took an 85 percent stake in the club last May.

Administrators Duff and Phelps, who said on Monday they had yet to receive an offer for the club that would enable them to name a preferred bidder, said the sanctions could impact on the sale process.

"All of us working on behalf of the club are utterly shocked and dismayed by the draconian sanctions imposed on Rangers in respect of these charges," joint administrator Paul Clark said in a statement.

"We do not know how bidders for the club will react to these sanctions and what effect they will have on their proposals," he added.

"The club has asked for full written reasons for these decisions and intend to appeal against the findings."

The SFA will issue reasons for the decision in "early course" after which Rangers will have three days to launch an appeal.

The Rangers Supporters Trust also described the punishment handed down to the club as draconian and said they would consider boycotting SFA sponsors in protest.

"This is a shameful decision that has been taken with the sole purpose of crippling Rangers Football Club," they said in a statement.

"All options are on the table and no Rangers player or supporter can credibly play in or support the national side until this ridiculous decision is reversed."

Adding to the doom and gloom around the Glasgow-based side was the two week suspension of striker Kyle Lafferty for a breach of club discipline, a Rangers official told Reuters on Tuesday.

The Northern Ireland striker, who along with other Rangers players agreed a 75 percent wage cut last month, has been dogged by injury problems in recent weeks.