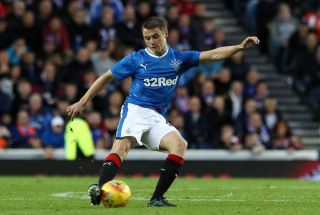 Jordan Rossiter looks to have played his last game for Rangers after joining Fleetwood on a season-long loan.

The midfielder has been reunited with manager Joey Barton and first-team coach Clint Hill, two of his former Rangers team-mates. He follows another Gers colleague, Jason Holt, who played for Town on loan last season.

The former Liverpool player made 22 appearances on loan for Bury last season and was deemed surplus to requirements by Steven Gerrard this summer.

The loan spell will take Rossiter to the end of his four-year Ibrox contract, during which time he has made 16 appearances for Rangers during an injury-hit stay.

The 22-year-old said on the Sky Bet League One club’s official website: “I am made up to have signed for Fleetwood Town.

“I know the manager Joey Barton from our time at Rangers, and I also know Clint, and when they got in touch about me coming down to Fleetwood it was the place I wanted to come and play my football.

“Jason Holt spoke highly of the club. He told me all these good things and for me that was enough. I just can’t wait to get started.”