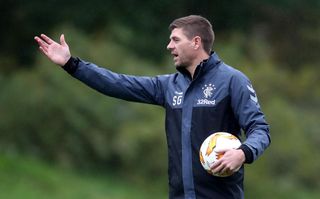 Steven Gerrard revealed he has ordered Rangers to practise penalties ahead of their Europa League decider with Legia Warsaw.

But the Ibrox boss admits it is unlikely to prepare his Light Blues players for the lonely walk they could end up facing on Thursday night as they go in search of a place in the group stages.

Gers will be put on the spot should they repeat last week’s goalless draw in Poland when Legia visit Glasgow for the second leg.

Gerrard knows all about the pressure shoot-outs carry, having failed to net against Portugal from 12 yards as England crashed out of the 2006 World Cup.

He made his players rehearse their spot-kick technique at the Hummel Training Centre, but confessed the shooting drill will bear little resemblance to the scene that could yet await at Ibrox.

“I don’t think it’s a big advantage because it’s a completely different situation,” admitted Gerrard. “Taking a penalty in front of 22 players and 10 members of staff is not the same as doing it in front of 47,000.

“It’s very difficult to replicate that situation but I do think walking up, preparing your technique and having a think about where you’re putting the ball, so you’re really set in your decision before the penalties come, can be helpful, so that’s the reason behind it.”

Gerrard’s team kept their cool amid the frenzied atmosphere they faced at the Polish Army Stadium last week.

And the manager has urged his team not to panic should Legia grab an away goal in Govan, which would leave Gers having to score at least twice to qualify.

He said: “We want to be as aggressive as possible. We want to avoid conceding an away goal, of course we do.

“But we also have to prepare for setbacks within the game and if things take a turn for the worst.

“I don’t want to see a negative reaction if that is the case. We want to play this game with confidence and belief.

“We’ve got a decent record at Ibrox. It’s not the nicest place to come to for opposition players.

“We expect the fans to be right up for this one. We expect the place to be rocking. We want to give them a performance that suits that atmosphere.

“I think only our maximum will be enough tomorrow.

“What we can’t have is certain situations within the game affecting us from a mental point of view.

Reaching the group stages last year was the major achievement of Gerrard’s debut season with Gers.

And with the opening Old Firm clash of the new campaign to come on Sunday, the former Liverpool skipper is excited by what the next few days may have in store for his side.

“It’s very important (to secure a group stage place). When you sign up to Rangers you have a responsibility to compete on all fronts.

“Europe is a big part of that for different reasons. One, to add to the history and tradition of the club but also from a financial point of view as well.

“It would be a decent achievement to do it two years on the spin, for sure.”