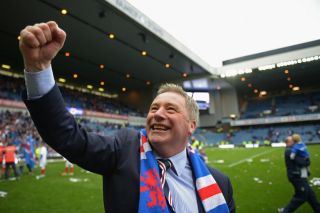 The fallen Glasgow giants needed only a win against Airdrieonians to secure the championship in Scotland's third tier with eight games to spare, and they duly delivered with an emphatic 3-0 victory at Ibrox.

A first-half hat-trick from Lee McCulloch proved the difference in a predictably one-sided encounter, the former Wigan Athletic forward scoring twice from the penalty spot inside the first 21 minutes before completing his treble four minutes from the break.

There were to be no more goals after the interval, but Rangers stretched their lead at the summit to 26 points regardless, with eight games left to play.

The title triumph marks a rare moment of celebration for the troubled club, who have continued to be blighted by financial concerns since their drop out of the top flight in 2012.

They were admitted back into the fourth tier after the original club went into liquidation, with Rangers' assets being purchased and a new club being formed.

Ally McCoist led them to the Division Three title last term, finishing 24 points ahead of Peterhead, and has now followed that up to win promotion to the second tier.