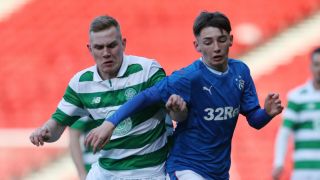 Rangers have confirmed promising youngster Billy Gilmour will leave the club for Chelsea at the end of the season.

The 15-year-old is regarded as one of the biggest talents around in his age category and had long been linked with a move to the Premier League.

Manchester United, Arsenal and Chelsea had all been credited with an interest in the midfielder and he has now opted to continue his career at Stamford Bridge.

"Rangers can confirm that agreement has been reached for our under-16 player Billy Gilmour to join Chelsea," a statement on the club's official website reads.

"The club’s preference would have been for Billy to stay at Rangers but when he made clear his desire to move to the Premier League it was important that we maximised the commercial value for him. We believe we have done this.

. can confirm that agreement has been reached for player Billy Gilmour to join Chelsea: May 9, 2017

"The agreement will provide Rangers with a significant sum for a young player who has yet to play first-team football, and further significant amounts could be due based on milestones being reached. We are pleased with this outcome and believe this deal represents good value for Rangers.

"That he was sought after by many Premiership clubs, and indeed a number of the largest clubs in Europe, further demonstrates the quality of player now being produced by the Academy. Everyone at Rangers wishes Billy well for his future."