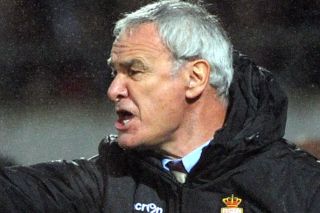 Rademal Falcao suffered what appeared to be a serious knee injury in the Coupe de France win, which could keep the £50million striker out of the rest of domestic campaign, and the World Cup.

A fuming Ranieri questioned why no cards were shown to their lower league opponents, having complained about poor tackles aimed at the Colombian before he was injured.

"If Rademal Falcao is seriously injured, it's on the referee," Ranieri said on Wednesday.

"I just want to say one thing, I know that when you play a 'smaller' team, they will play really hard, it's normal and I told it to my players.

"But it's not possible that the referee whistles for every foul but never gave a yellow card to anybody.

"The referee needs to see when there is a foul, and award the free-kick, and when it's really hard, it's a yellow card for the first one and a red card for the second one.

"Tonight, I did not see that from the referee."

Falcao has scored 11 goals in 19 matches for Monaco this season and is also the main main in Colombia's bid to have a successful World Cup in Brazil later this year.

While there has been no official word from Monaco on Falcao's injury, teammate Jeremy Toulalan feared the worst for the 27-year-old striker.

"We've lost Radamel - It's a big blow for the future," Toulalan said

"I think it's serious and the news isn't reassuring."