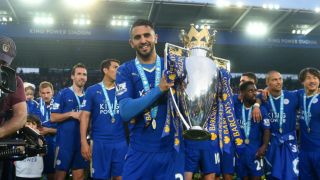 Claudio Ranieri has few doubts about Riyad Mahrez's future as contract talks continue between Leicester City and their star man ahead of the new Premier League season.

The reigning champions are desperate to hold onto the mercurial winger, who scored 17 Premier League goals and laid on another 11 for his team-mates last season, despite reported interest from Arsenal.

But Ranieri says he has seen nothing in his day-to-day interactions with the Algeria international to suggest that he is seeking an exit from the King Power Stadium.

"If he wants to sign a new contract it is OK. For me it is important that this season he stays with us," he said.

"He is very happy. I see him every day and he has never talked to me about something strange. I am confident with him. This is experience.

"The club is working very well and I think the players want to stay with us to try and to improve on last season. We know that is very difficult but we are ambitious. Then it is important they sign, stay with us and gain experience in the Champions League. Then we will see."

Of less interest to Leicester are the services of full-back Ritchie De Laet and former Switzerland captain Gokhan Inler, who struggled to break into the team after signing from Napoli last season.

"It's better for them if they find a new solution. It's difficult for them to play as I already have two players for each position. When I was a footballer I wanted to play and compete," Ranieri said.