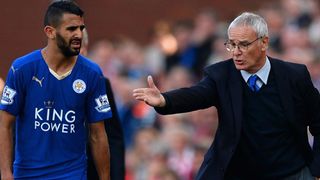 Leicester City manager Claudio Ranieri will sit down with Riyad Mahrez before making a decision on the club's designated penalty takers for the rest of the season.

Mahrez has been one of Leicester's best in 2015-16 but has missed two successive penalties - first against AFC Bournemouth in a scoreless stalemate earlier this month and then on Saturday against Aston Villa in a 1-1 draw.

Ranieri's men have only managed one win since a 1-0 loss to Liverpool at the end of December - picking up four draws in the process as they sit equal top of the Premier League with Arsenal.

And Ranieri says he will have a chat with Mahrez over who takes the club's spot-kicks from now on.

"If I remember well, this is the second or third mistake from Riyad. I want to speak with him," said the Leicester manager.

"If he is calm, if he wants to continue to shoot the goal, he can continue but now it is important to think about the next match."

The Italian praised Mahrez for his performances so far this season but claimed he is not getting enough protection from the referees.

"All the big players receive this kind of pressure, then for him it is a new challenge. I am very, very close to him and I want to help him.

"Riyad is our main player and he must continue to play in this way."