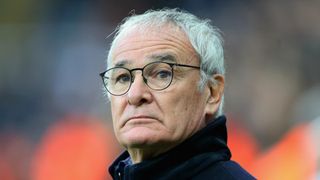 Leicester City manager Claudio Ranieri has set his players a new target of 79 points for the Premier League season.

The Foxes were held to a 0-0 draw by 10-man AFC Bournemouth on Saturday, with Riyad Mahrez missing a second-half penalty in a match that saw them move on to 40 points.

That points tally – and the presumed Premier League safety that comes with it - has long been Ranieri's public target, despite Leicester's flying start to the campaign that means they sit second having previously being top.

But after reaching the milestone in their 20th match, Ranieri feels his players should aim high and look to go one better than the 39 points they achieved in the first half of the season between now and May.

"Now we must achieve the next goal and remain calm," said the Italian.

"We did 39 points in the first half [of the season] so in the second half we try to make 40 points. I know it's difficult but this league is crazy. We are safe so we try."

Mahrez's saved spot-kick meant Leicester missed the chance to keep pace with leaders Arsenal, who have opened up a two-point gap, but Ranieri refused to be downbeat and is focussed on the bigger picture.

He said: "Forty points, come on - it's fantastic. We didn't score but it's another clean sheet and champagne for my players, of course.

"We tried to win the match and do our best but when you play with such high intensity, you can make mistakes and we made mistakes with the last pass.